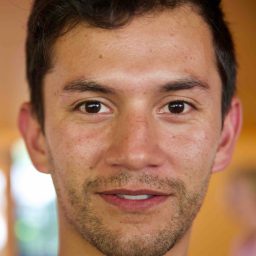 Leonardo Canales is an Alexander Technique Teacher from Chile. Leo is very thorough, imaginative and enthusiastic in his exploration of the actor’s possibilities of expression. Leo graduated from the School for F.M. Alexander Studies, after arriving from Chile in 2014, drawn to studying the Alexander Technique via his theatre background. He was previously mentored by 16th Street’s beloved Penny McDonald.

“I strongly believe in curiosity instead of judgement, spontaneity rather than habits or preconceived ideas and adaptability as opposed to fixation. In the classroom, on stage or the rehearsal room, a respectful spirit is promoted in my work. A spirit of equality and transformation that enables every individual to unfold their full potential. I’m bilingual, so I care deeply about language and words – as they create our reality and can be as strong as any weapon. I believe that a conscious learning process can create sensitive and responsive individuals, enabled to connect to themselves in others, becoming deeply aware of themselves and their environment.” – Leonardo Canales

Leonardo has extensive experience in working with a wide range of people from diverse backgrounds with the Technique – not just actors – and has had great success in helping them finding ease of motion. He has been exploring the application of the technique to theatre as well as to other activities, opening up the benefits of the Alexander Technique to a broader audience – sharing Alexander with anyone who would like to know more about this approach to life, movement and balance. Leo’s lessons incorporate dynamics elements from theatre and the science of the Technique.

“Alexander Technique is such an integral tool for the actor – the way it ignites body & breath and how it connects to feeling & character.  I worked with Leo Canales recently on my preparation for A VIEW FROM THE BRIDGE for MTC, and found he was especially intuitive & responsive to my process. We explored together the connection of the Alexander work to the text, rather than the Technique simply sitting in isolation. Leo’s experience as a performer himself means he has an added understanding of the actors ultimate needs – reaching a depth & readiness for performance.” – Daniela Farinacci (AACTA Award Nominated Actor)